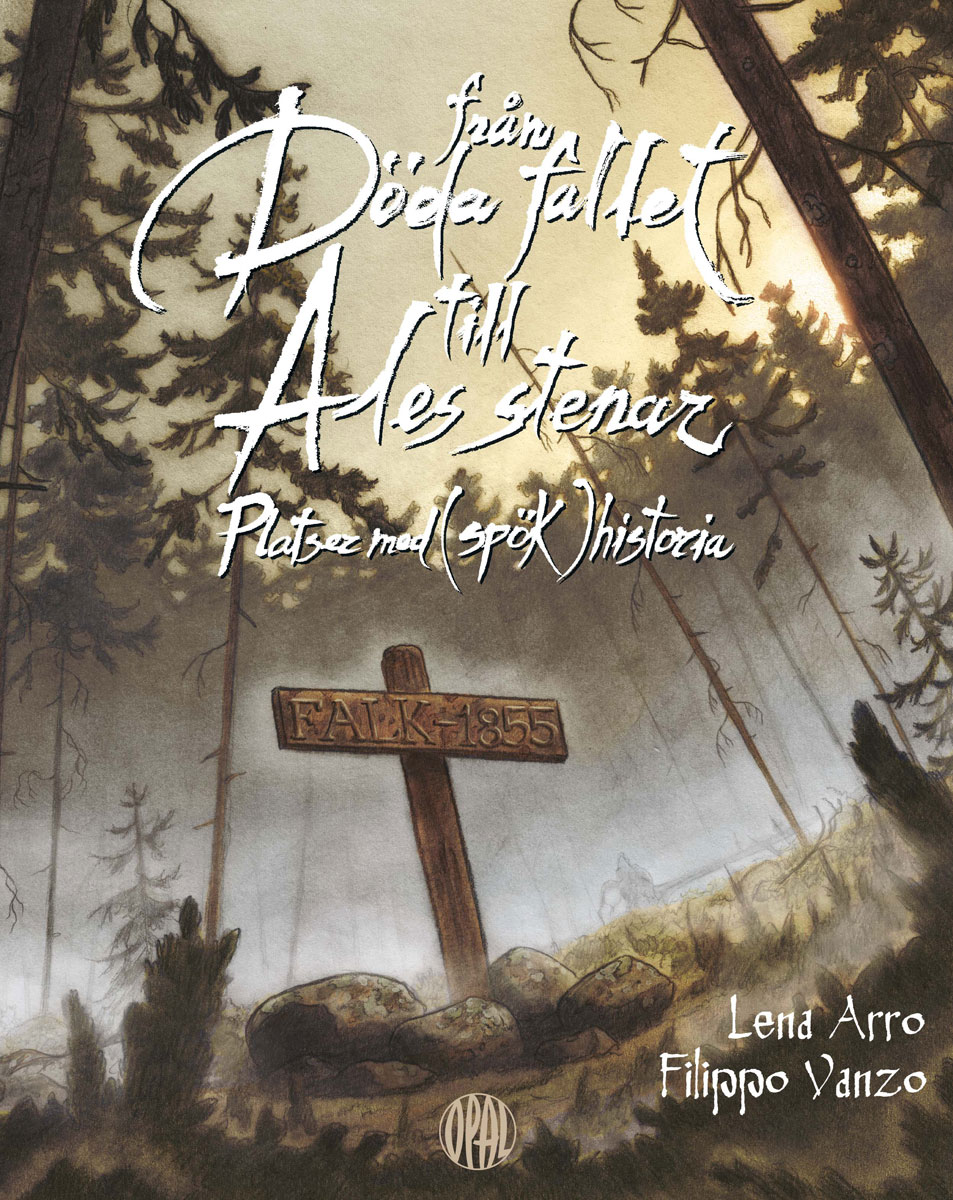 A fully illustrated collection of 9 mysterious places in Sweden where history and folklore blend into each other.

When the publisher approached me to illustrate the book, they presented the project as an intriguing mix of fiction, folklore, horror and history.

The book takes the reader to a North-to-South journey across Sweden to visit 9 remarkable locations and their historical and supernatural legacy.

The visual approach is greatly in debt of the work of classic Norwegian illustrator Theodor Kittelsen, whose ability to portray the folklore and myths related to Scandinavian nature remains unsurpassed.

Each chapter in the book features an overview of the location’s mysterious and intriguing features, followed by a ghost story related to it. 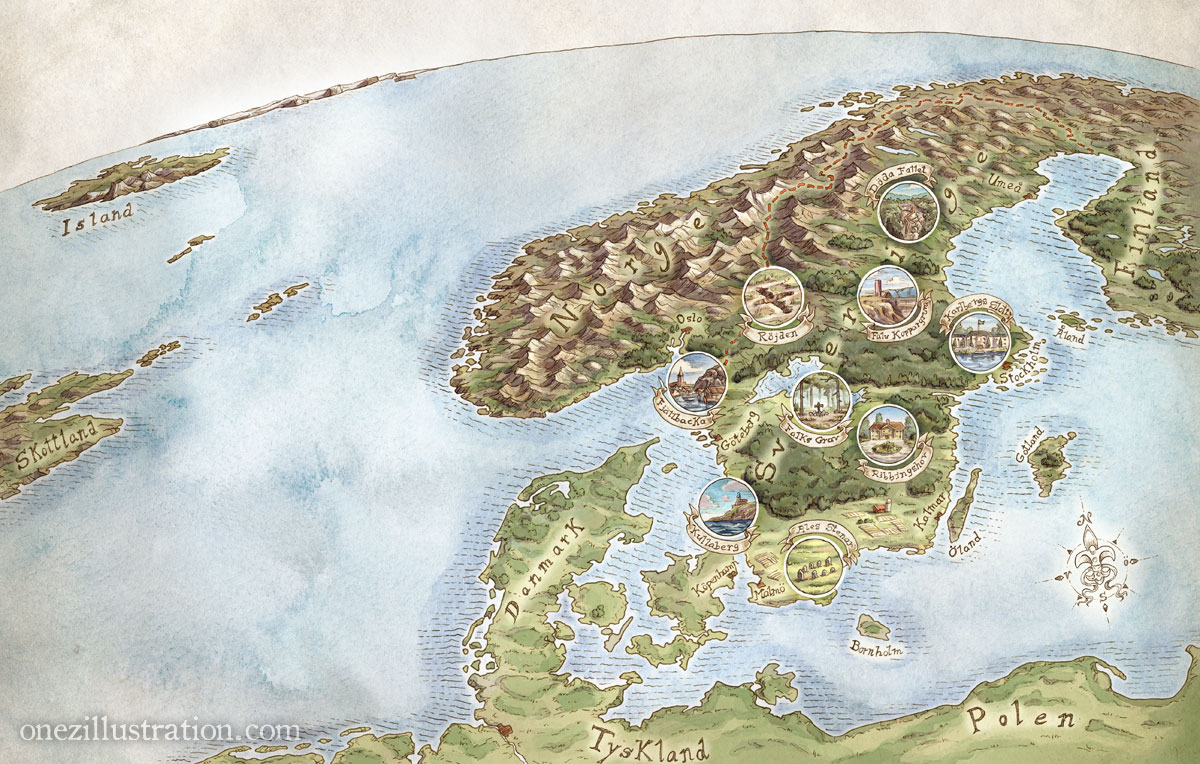 Storforsen was one of Sweden’s most notable waterfalls, plunging more than 30 meters from lake Ragundasjön, in the Jämtland province.

Both lake and waterfall disappeared in a matter of just a few hours in 1796, when a flood triggered a destructive tsunami that rerouted the river to a small canal built years before by Magnus “Vild-Hussen” Huss.

Curiously enough, no one was injured during the accident. Vild-Hussen died the year after, drowning in the newly formed river while on a boat trip.

The copper mine in Falun, only recently closed in 1992, had been operative for a whopping 1.000 years. The mine’s history is rich in both facts and folklore.

Legend has it the mine was discovered by a goat named Kåre, whose horns became all red by rubbing them in the copper-rich soil.

A man named Fet-Mats disappeared in the mine in 1677. His body, perfectly preserved in vitriol, was discovered some 40 years later.

Workers knew the mine was a dangerous place, and an encounter with the gruvfrun (the ‘lady of the mine’) could be either reassuring – as she could warn about collapsing tunnels or lead to preciuous metals – or ominous, signalling one’s death or disappearence in the mine. 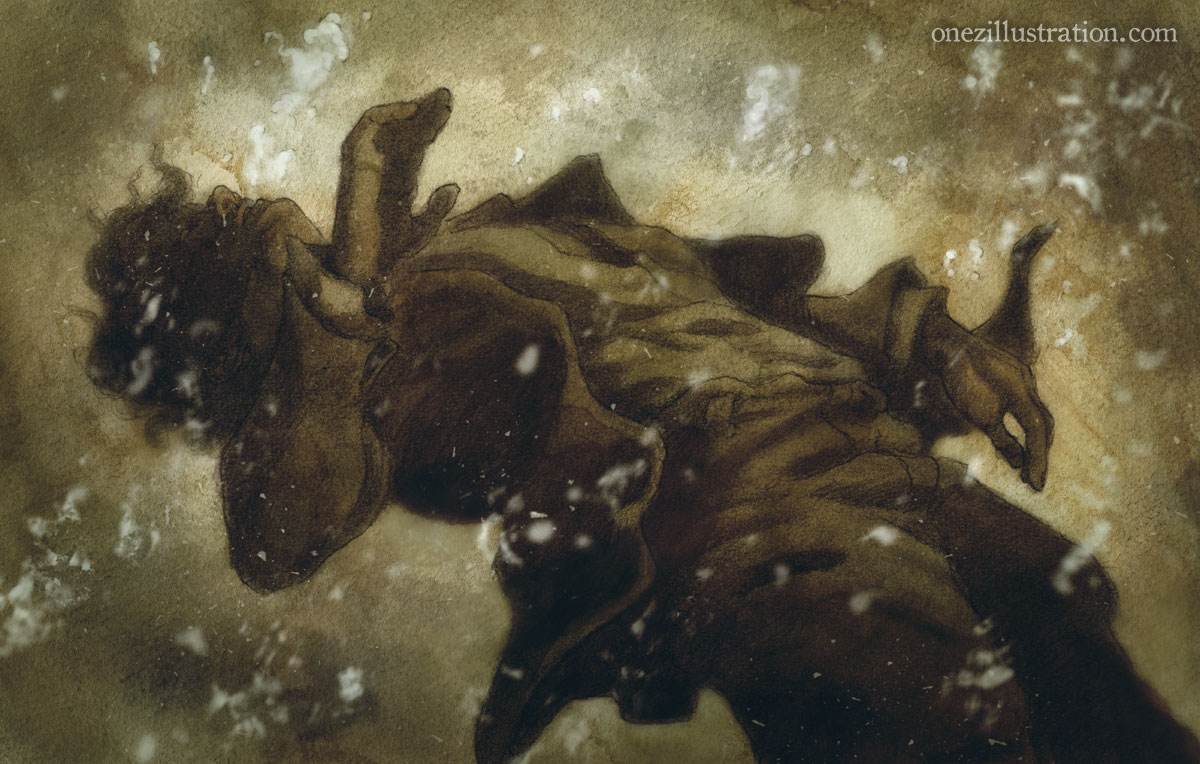 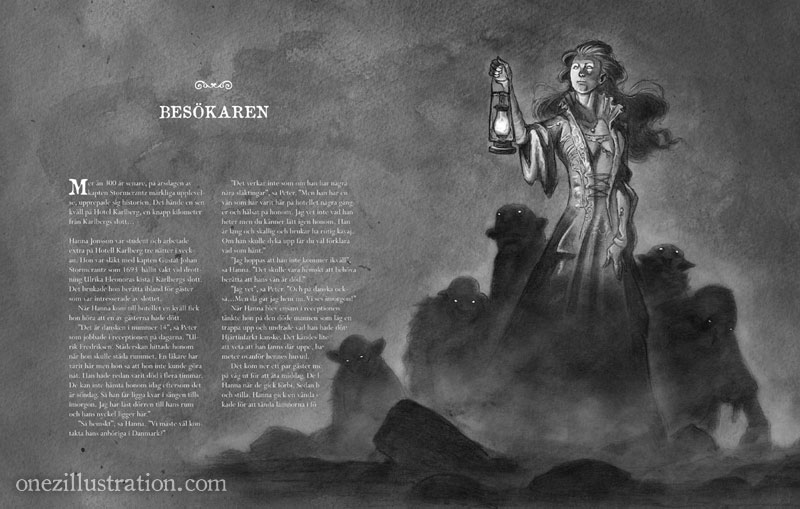 The densely forested area of Röjden, on the border with Norway, was settled by Finnish immigrants in the 17th century.

They practised a type of agriculture called svedjebruk, consisting of cutting down and burning parts of the forest, and growing crops in the ash-covered soil.

Röjden was also infamous for being believed to haunted. Paranormal activities were so common that one family had to move and tear down their house.
Also notable is the so called ‘Röjden cross’, a cross-shaped mark on the ground of unknown origins where grass never grows.

Karlberg Palace in Stockholm – build and expanded for more than a century, from 1634 to 1795 – houses a well-known ghost story.

In 1693 queen Ulrika Eleonora of Denmark died at Karlberg Palace after suffering from a long illness. On the night of her death, one of her best friends, countess Maria Elisabeth Stenbock visited the room containing her her body. The officer in charge, Captain Stormcrantz, after an unusual long time passed, looked into the key hole and saw the countess and the queen talking to each other by the window. He was so shocked that he started coughing blood. When he looked again, the countess was gone.

It was later revealed that countess Stenbock had actually been bedridden that night, and hadn’t left tow. She died of her illness a few weeks later. Captain Stormcrantz also fell ill, and died three days after the event took place. 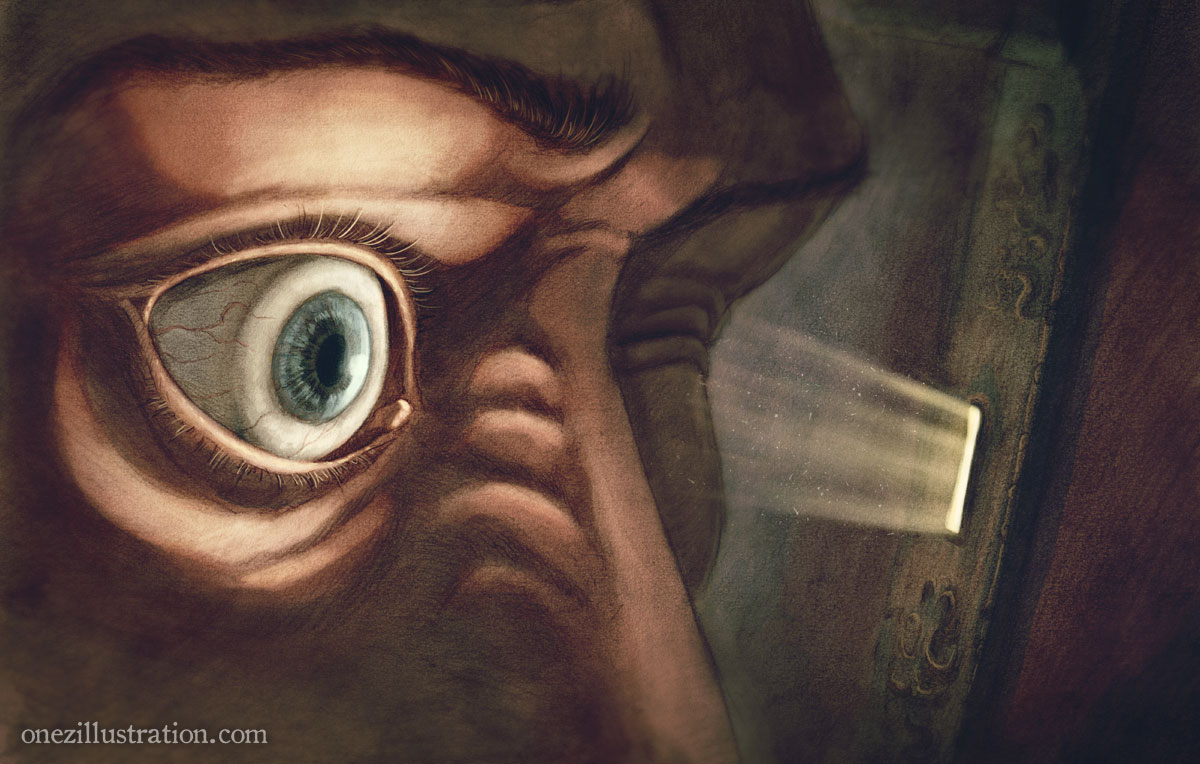 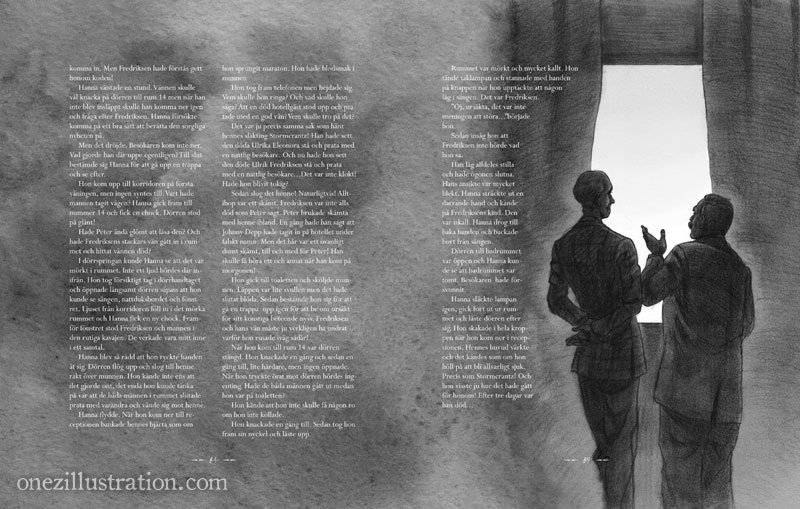 Fjällbacka – a polular summer destination on the West coast of Sweden – has been a fishing village for hundreds of years, inhabited by fishermen and seafarers. Ships and navigation were vital and that’s why one of the few Swedish stories about ghost ships is about Fjällbacka.

According to the legend, the ship Dödsseglaren (The Dead Sailor) sails straight towards the coast at high speed and with full sail, but just before it reaches land, it disappears into thin air. If the ship is crewed by a group of men in their red scarves, there is no danger. But if you see a black-dressed woman on board, that bears ill-fortune. If the woman is clad in white instead, it means death.

[Roughly translated from the original Swedish]

In 1854, 26-year-old Jonas Falk was sentenced to death by beheading for robbery and murder.

The sentence was carried out in 1855 in the forest area of Svedmon in the Västergötland province. His body was buried on site, as criminals were not allowed burial in a cemetery according to the custom of the time.

A cross with the words “FALK – 1855” still exists today, not far from the execution site. The headless ghost of young Falk is said to appear from time to time, and the grave always has fresh flowers. 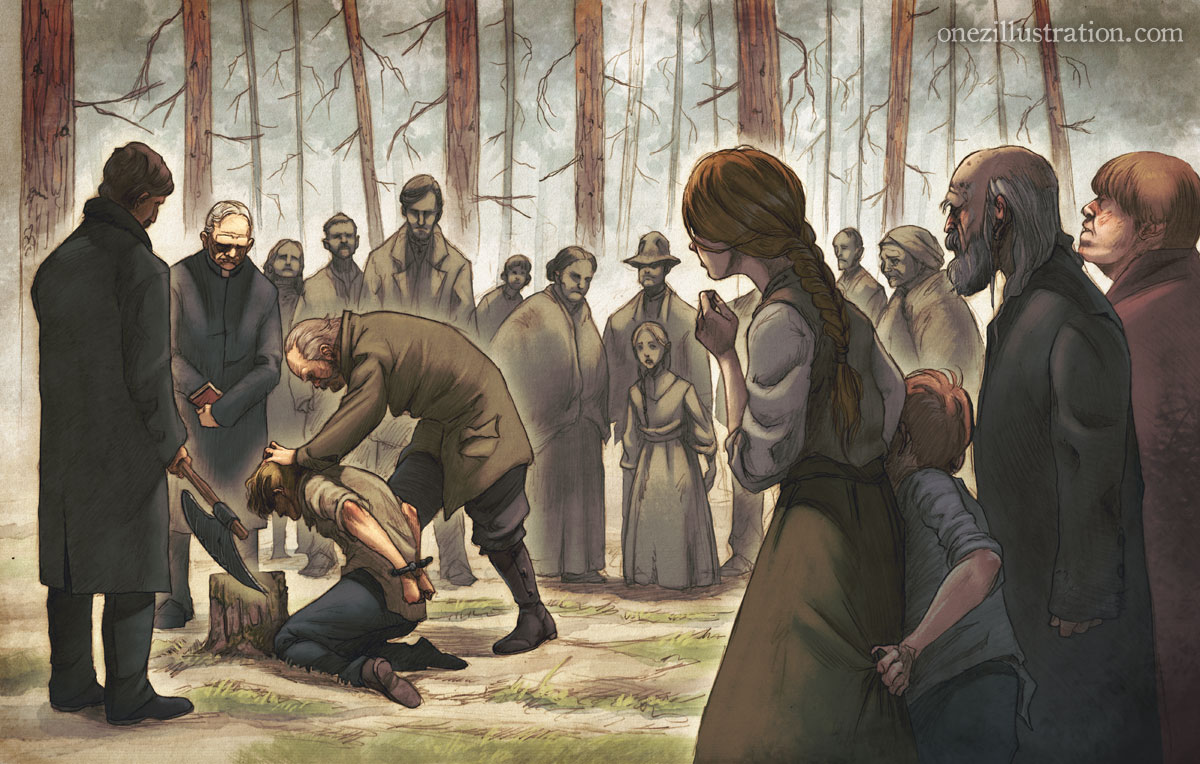 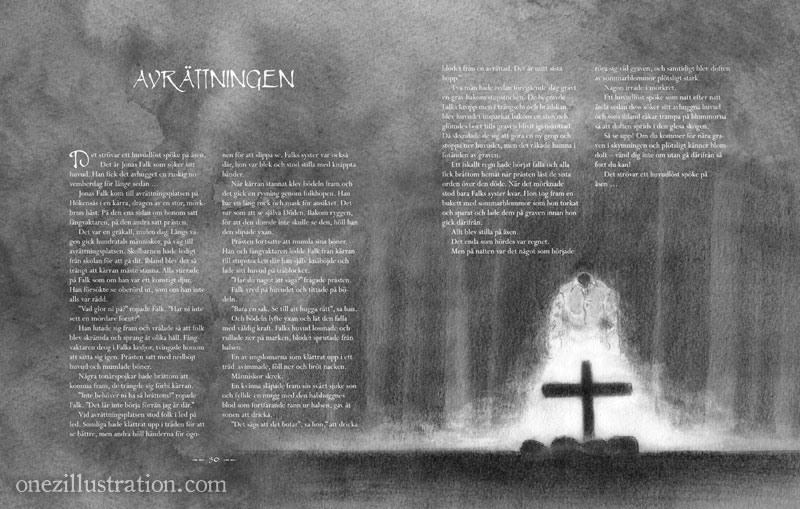 In Scandinavian folklore, “bergtagning” (literally “mountain-taking”) describes the act of kidnapping of human beings (often children) by supernatural beings – trolls in particular in Sweden – who lure their victims into the woods or into their dens in the mountains.

In the summer of 1669, 3-year-old Anna Märta von Schaar disappeared without a trace while she was picking flowers in the field near her home in Ribbingshov, in the province of Småland. Her family searched everywhere around the area, but she was nowhere to be found.

One year later, a stable boy working for the von Schaar family saw a child in the field, picking flowers. It was Anna Märta, and she hadn’t aged one day. She was even wearing the same clothes. For fear that she had been “bergtagen” by trolls, and promised as a bride to a troll-husband, her parents arranged her wedding when she was only 4 years old, hoping to discourage the trolls to come and claim her again when she had grown up.

Years later, married and with a child, Anna Märta went back to Ribbingshov to visit her parents. One day, while she was looking out of the window, she started screaming: “Look, there comes the old man to get me again!” 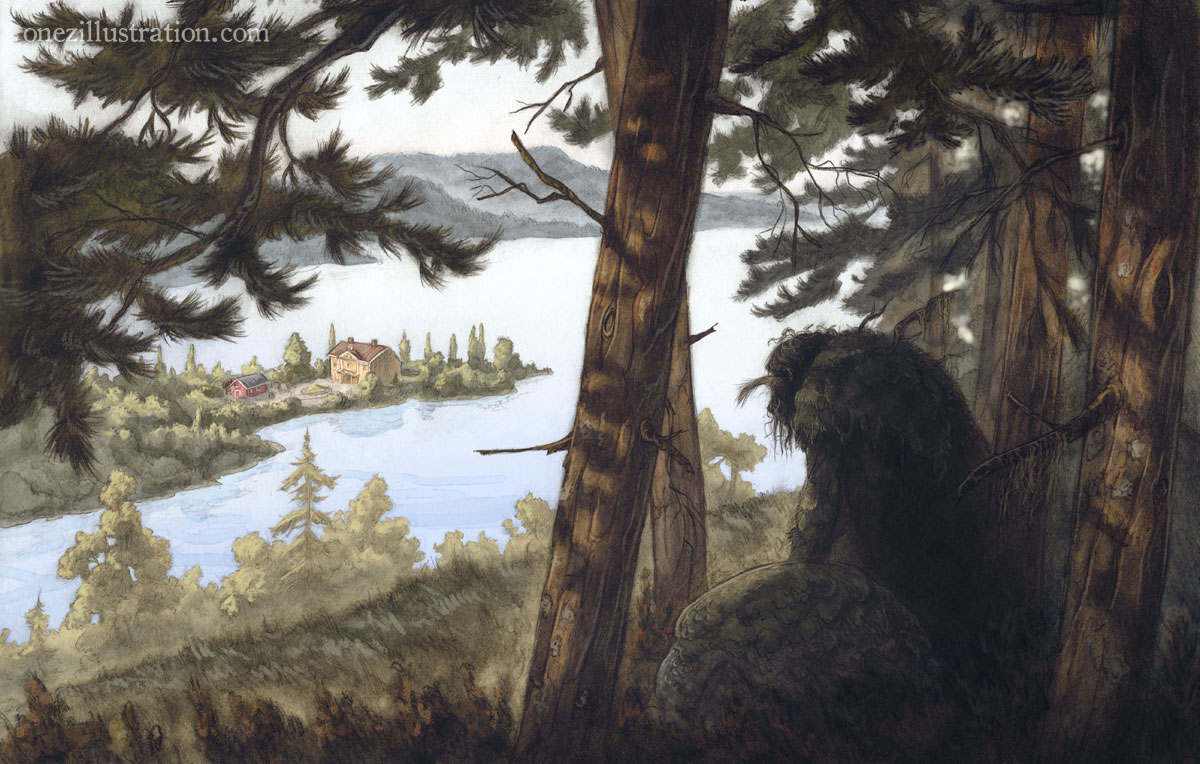 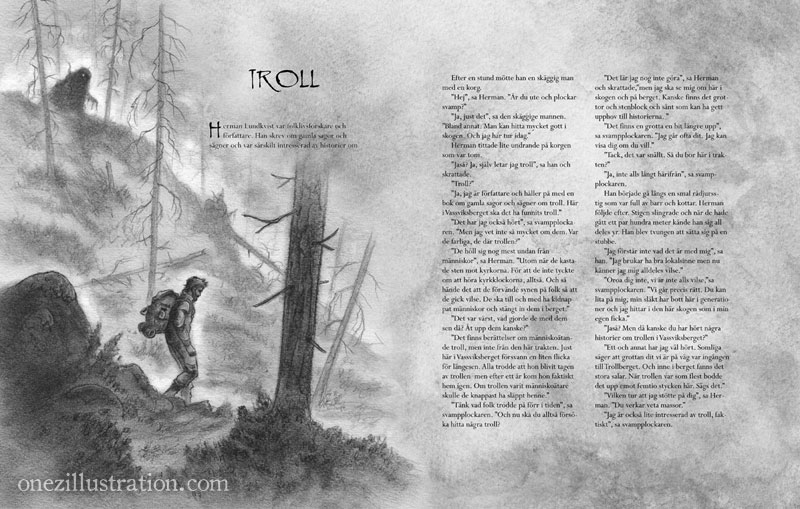 The peninsula of Kullaberg, on the south-west coast of Sweden, hosts the oldest lighthouse location in Scandinavia, Kullen, and its homonymous lighthouse, built in 1563 (the current building is from 1843). The area is dotted with caves, both natural and man-made.

The local folklore is rich in tales about ‘strandgast’, or beach gosts: drowned sailors who did not find peace in death. They are said to roam the costs restlessly at night, their ghastly shrieks resonating far inland. 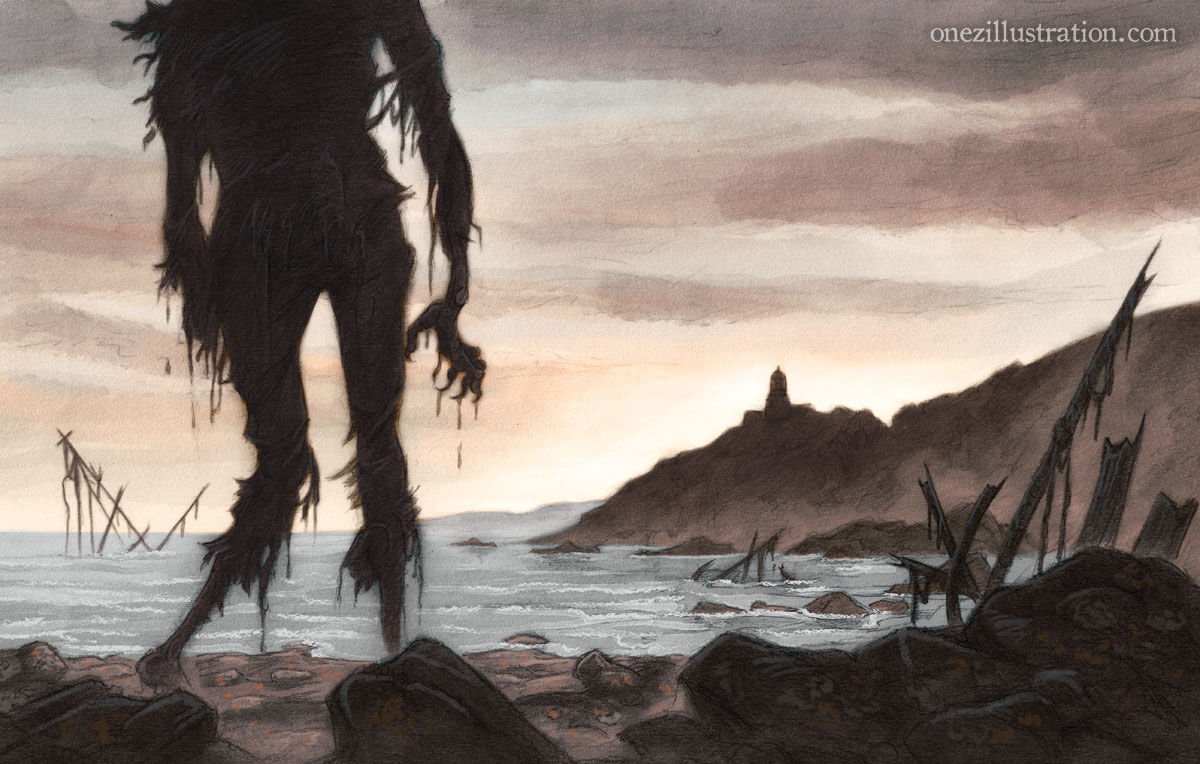 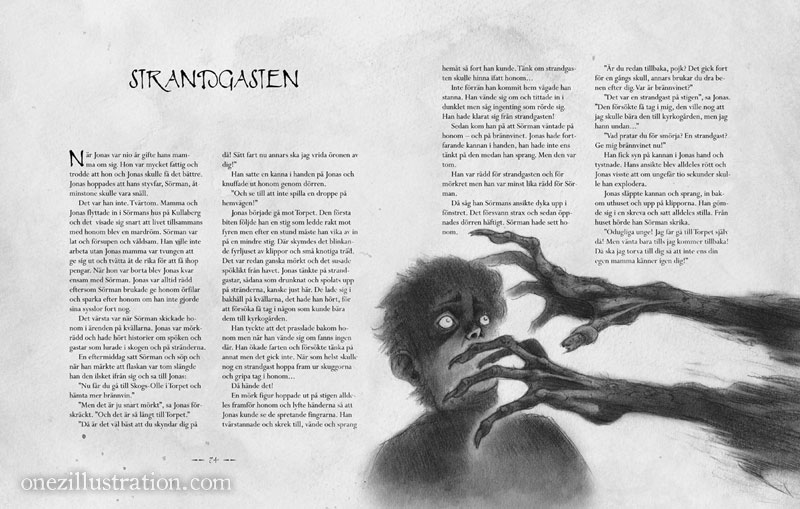 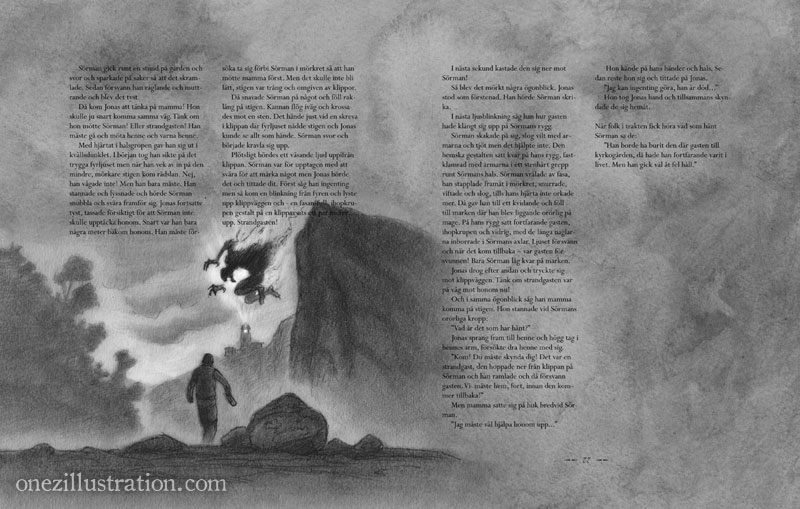 And our journey ends with Ale’s Stones in southern Sweden.

It is a megalithic stone ship monument of 59 large boulders, dating back 1400 years to the Scandinavian Iron Age. Some claim the site is as old as 5500 years.

Believed by some to be the burial site, just like Stonehenge no one really knows what tits purpose was. Some theorize it was used as a landmark for seafaring, or as a sun calendar, marking the exact positions of sunset and sunrise during the summer and winter solstice.

There are also tales of ghosts from the Viking age haunting the area in their stone ship. 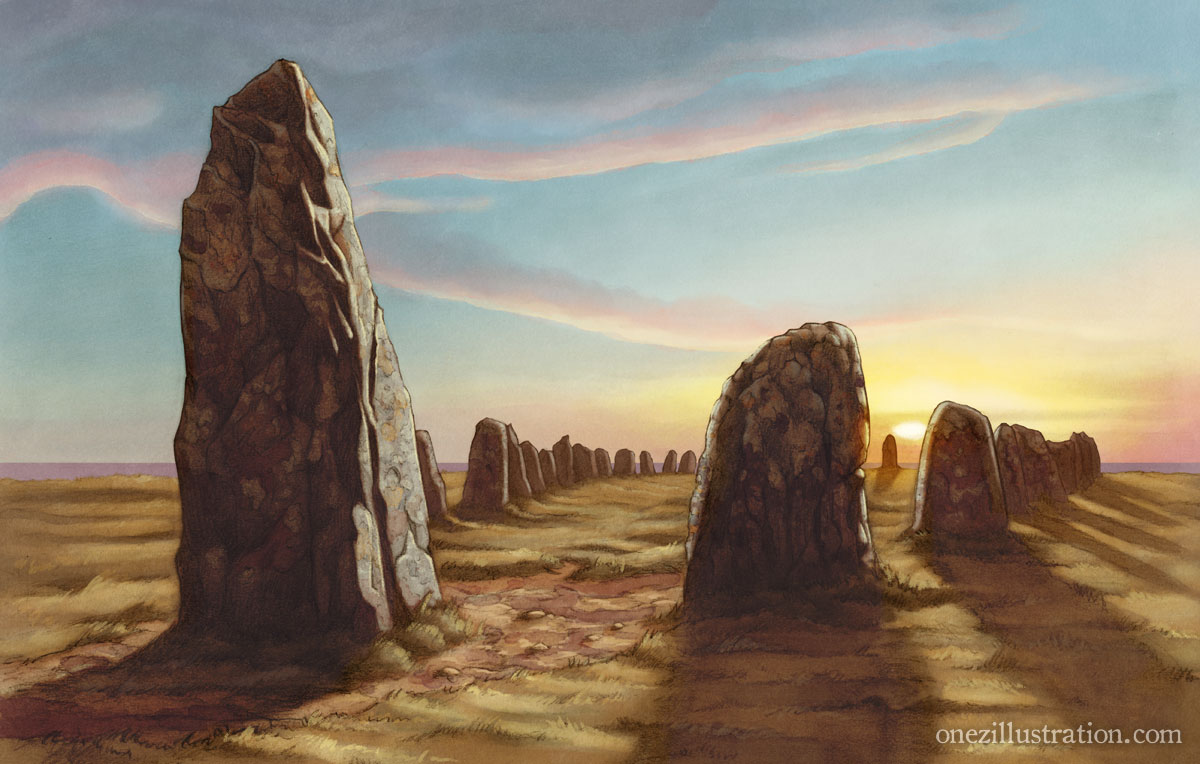 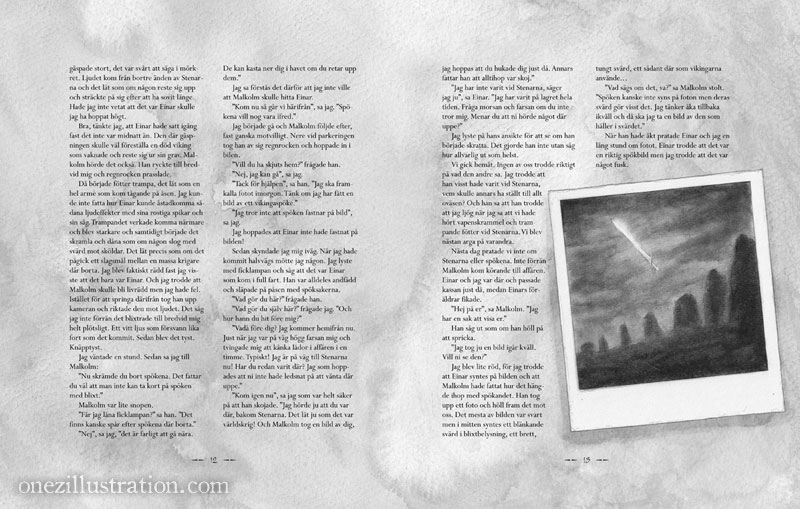 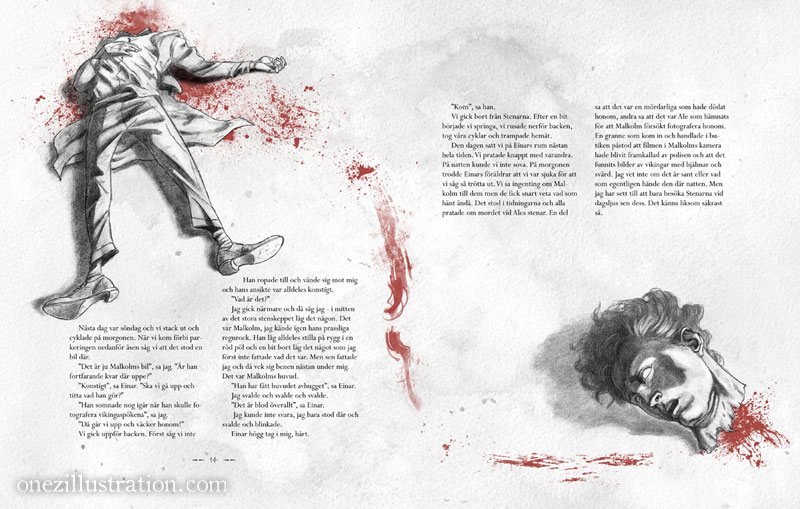