I did another map exercise, once more inspired by Swedish nature.

This time I thought of adding a background story for the map (just scroll to the end or click here), and I have to say I really enjoyed the process of coming up with written words to try and make sense of what came out of my hand. 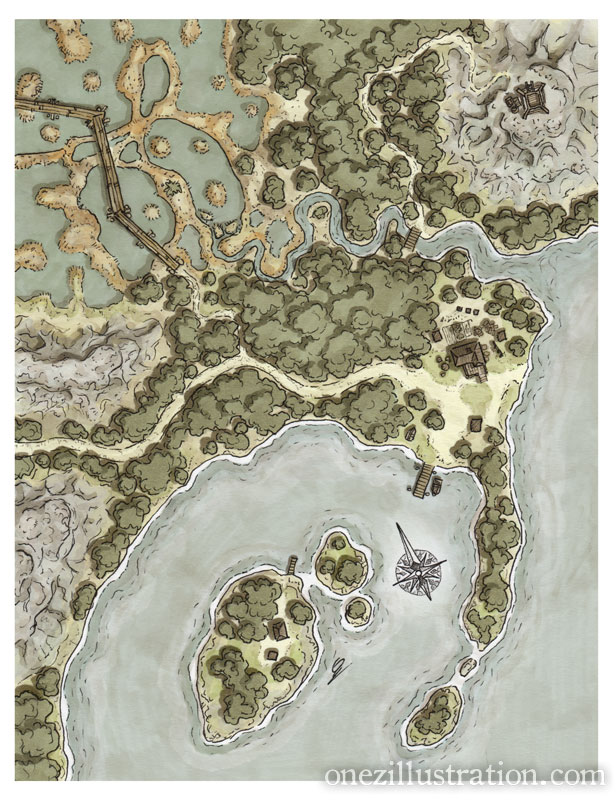 When the world started crumbling it had been a long time coming.
All the signs were there, unseen by most.

But he knew. Sven knew.

When he nested in, he was more of an infant cockroach than a mature human being. He taught himself how to let nature take care of him. Blueberries and lingonberries from the moss carpeted forest in the North, mushrooms from his lucky patch West of the mire, perch and rudd from the lake, occasionally some bird eggs from the little island in the bay during the nesting season, hazelnuts. ‘Only take what is necessary’ was his mantra. Bee honey, apples and vegetables he had taught himself to grow in the small clearing behind his wooden hut.

He had seen it many times before, while wandering the forest. The first time was when he was six, from across the lake. The collapsed roof, the rotting wood, the overgrowing vegetation. Over the years he grew accustomed to, and somehow fond of that old hut. ‘This is where I want to die’ he once thought to himself.

The deer visited often and, knowing him harmless, grazed peacefully in the meadow behind the hut. Not quite so the wolves, for he did not have any cattle. He could hear them at night, in the deep woods just a few miles to the West, their primal and ancient howls. They had no books, no temples, no money, and yet still they roamed the land. He wondered how many of their kind – and how many of his – were doing so.

He soon learnt to respect and avoid the brown bear that lingered more often than not close to the mire. He built footbridges to stride faster across the wetlands.

The watch tower was already there, sometimes he wondered for how long, and he barely ever used it. Somewhere deep inside he feared that one day he would see the ignorance creep closer and closer, as it had happened during the years of his youth.

At times his thoughts dwelt on his wife. She was beautiful, light, unearthly. She was nothing like him.

He was not sad anymore, nor happy. He just was, just as he thought he always should have been.

And there he waited.
Time was on their side after all…